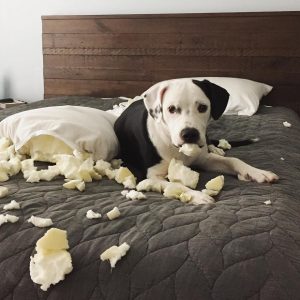 When considering how to protect your real estate investments, don’t forget about pets. It’s no secret that pets can cause serious damage to a home. In addition to home damage, certain breeds may also pose other liabilities. As a flexible and easy to work with landlord, you may want to welcome all breeds. However, insurance companies don’t feel the same. This can make it difficult for people with pets to find rentals willing to accept them. Especially, for renters with multiple pets.

Not All Pets are Destructive

While it’s absolutely true that many pets are destructive (especially young ones), most are not. When carefully vetting prospective tenants through personal references, interviews, and so on, you can likely find out how a person cares for their pets and property.

Do they often exercise their pet? Do they work long hours away from home? Do they take their pet on day trips with them? Do they leave the pet alone for hours on end with no company, exercise, or potty breaks? These types of questions can be found out during casual conversation when interviewing possible tenants and make a huge difference in the way the pet will behave in your rental property.

You should also establish a pet agreement that includes a picture of the pet, its veterinary information and a pledge that there is no history of violence with the animal. Then collect a pet deposit, along with monthly pet rent, to cover possible pet damage to the property.

Some Rentals Are More Pet-Friendly Than Others

Does the property have a fenced yard? Does it have tile flooring?  If so, you may want to consider accepting pets.

It would be difficult for a domesticated animal to harm tile floors. However, in properties where there are wood floors, you may not want to allow dogs as the potential for damaging these floors is much higher.

Just because you accept pets in one property doesn’t mean you need to across the board. If none of your properties are a good fit for animals it is OK to state that.

Pet-Owning Renters Are Willing to Pay Deposits and Fees

People love their animals; they’re part of the family. This is why many renters are willing to pay an extra security deposit plus pet rent each month to ensure they can house their animals.

Most follow through with the required additional payments and are responsible for their pets.

Offering a refundable pet deposit could help ensure that the tenants help preserve the property and guard against pet damage, as well.

There is no incentive to prevent an animal from damaging a place if someone pays a non-refundable deposit up-front, however, if there are a few hundred dollars on the line, it’s safe to assume renters will put in the effort to fix any pet-related damage prior to move out or adjust said pet’s behavior.

What to Do If Pets Cause Damage

If upon move out, you sense pet odor, deploy an odor bomb in the venting system. This is usually less than $60 and very effective to destroy pet odor.

What about puppy chewing damage? If these damages exceed the pet deposit, try to bill the tenant for the remaining costs. Most of the time, they will not want to be taken to court and will settle up for fear of the cost coming up on their credit report.

Overall, accepting pets in your rentals can help you appeal to families that are not accepted in other properties. It is usually less frightening than it seems and there are ways to help undo pet damage caused by your tenants. The pros outweigh the cons in this case and help ensure that you are a flexible property owner who is easy to work with. Just make sure to cover your bases and protect your assets. 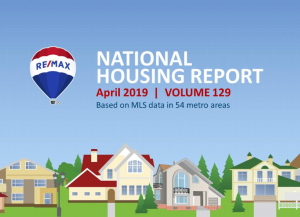 April home sales finished just 1.1% below a year ago as selling times shortened and tight inventory held steady, according to the RE/MAX National Housing Report. Meanwhile, April’s median home price of $251,000 in the report’s 54 markets was up a mere 2.1% – the smallest year-over-year April increase in eight years.

Compared to March, home sales in April sped up by a full week, taking an average of 52 days instead of 59. The average in April 2018 was 51 days. The Months Supply of Inventory in April decreased year-over-year from 3.0 to 2.6.

“April’s home sales blossomed, suggesting the typical seasonal jump in spring sales arrived later than usual this year,” said RE/MAX CEO Adam Contos. “Solid buyer interest and sellers with realistic price expectations advanced the market’s march toward equilibrium last month. That said, inventory remains constricted, and prices continue to climb, albeit at a slower rate. All in all, April’s results were encouraging, and we continue to be cautiously optimistic about the prospects of a healthy spring selling season.”

The average Days on Market for homes sold in April 2019 was 52, down seven days from the average in March 2019, and up one day from the April 2018 average. The metro areas with the lowest Days on Market were Omaha, NE, at 27, and Denver, CO, and San Francisco, CA, both at 30. The highest Days on Market averages were in Augusta, ME, at 116, Hartford, CT, at 89, and Miami, FL, at 86. Days on Market is the number of days between when a home is first listed in an MLS and a sales contract is signed.

The number of homes for sale in April 2019 was up 3.3% from March 2019 and up 4.8% from April 2018. Based on the rate of home sales in April 2019, the Months Supply of Inventory decreased to 2.6 from 2.9 in March 2019, and decreased compared to 3.0 in April 2018. A six months supply indicates a market balanced equally between buyers and sellers. In April 2019, of the 54 metro areas surveyed, only Miami, FL, at 6.3 reported a months supply at or over six, which is typically considered a buyer’s market. The markets with the lowest Months Supply of Inventory were Boise, ID, Denver, CO, Manchester, NH, and Omaha, NE, all at 1.2. 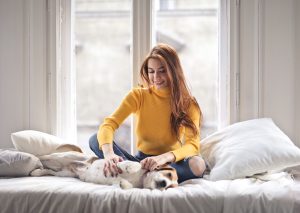 You did it! You searched for what felt like forever, to find a home that suits you and your family and of course, your pet. You had a smooth closing and now moving day is approaching!!

Packing up and moving to a new place is always stressful, but when you own a pet, things can get worse if you’re not careful. As much as you love your fur-baby, they can make things like packing and moving a lot more chaotic then it should be.

Should You Hire Movers?

You can pack up your belongings without a problem, but should you save some money and move things yourself? Or is it better to hire a moving company? While that depends on your fitness and how many possessions you own. Typically, it is worth it to hire movers.

First, movers are experienced carrying heavy objects and trained to do that safely. You can protect yourself from getting hurt by letting others carry everything. Even if you don’t own anything particularly heavy, your body can get injured through the repeated carrying of smaller boxes. Just remember to tell the moving company about your dog and give them any special instructions for when they interact with the pet. Research options in the area; there are several to choose from.

And if your dog starts getting in the way, put some food and toys in a separate room and shut the door. You can also bring your pet to a dog sitter for that day.

One often overlooked aspect of moving is picking which day to move. Anytime you pack up your belongings and move to a new home is going to be stressful. If your moving day ends up with bad traffic and moving companies already hired, things are going to get even more stressful.

That’s why you should aim to move on Sundays, Mondays, or Tuesdays. These are the slowest moving days, so your chances of having a smoother transition go up. (Some moving companies might even have reduced rates for the slow days.)

You also want to move when it’s good for your dog. For example, you’ll need up-to-date shots and prescriptions before you move. By moving when you’ve already taken care of both, you’re less likely to forget something important about your dog when the logistics of moving become too much.

You’ve hired movers for the right day, and it’s time to move — at least for you. Your dog doesn’t know that moving day is here, and they don’t even know what moving means. To them, their comfortable, old home is just gone, replaced by an unfamiliar place. To help with the transition, I Heart Dogs recommends that you quickly unpack some familiar toys and objects your dog loves. With all the change going on, your dog will appreciate something that hasn’t changed.

But before you even unpack, it’s a good idea to keep your dog in one room at first. Don’t overwhelm your pet with all the different sights and smells throughout your house. Keep those toys and bowls in one room with your dog. Then as your dog relaxes, introduce them to the rest of the house one space at a time.

Have A Smooth Moving Day

While it’s unreasonable to expect a completely relaxing moving day, there are ways dog owners can help make things happen more smoothly. Hire some movers and communicate to them about your dog. Move on a slower day, and slowly introduce the new place to your pet. This way, both of you can feel more comfortable — and that can make moving day much better. 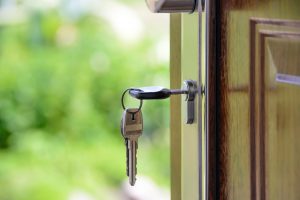 Congratulations, you’re selling your home! If you haven’t yet, you should hire a real estate professional to help you through the process and from there, your agent will ask you what level of access you want to provide to your potential buyers. This is quite possibly one of the most important key factors in selling your home! You need to make sure your home is accessible and here’s how:

With more competition coming to the market this summer, access can make or break your ability to get the price you are looking for, or even sell your house at all.

Contact me today and I will walk you through the different options to set you up for success! 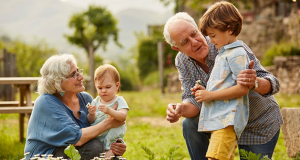 There are many reasons why a homeowner decides to sell their house and move. The latest Generational Trends Report from NAR asked recent home sellers to share their reason for moving.

The younger the respondents (ages 29 to 53), the more likely their top response centered around needing a larger home. Relocating for a job was the top reason for those ages 54 to 63 and the second most popular response for those under 53.

For homeowners over the age of 64, wanting to be closer to friends and family served as the top motivator to move. Downsizing to a smaller home or moving due to retirement came in as a close second and third.

Have you outgrown your current house? Are you a homeowner who can relate to wanting to be closer to family and friends? Is your house becoming a burden to clean now that the kids have moved out?

Contact my real estate office and I help set you on the path to selling your current house and finding the home that fits your needs, today!