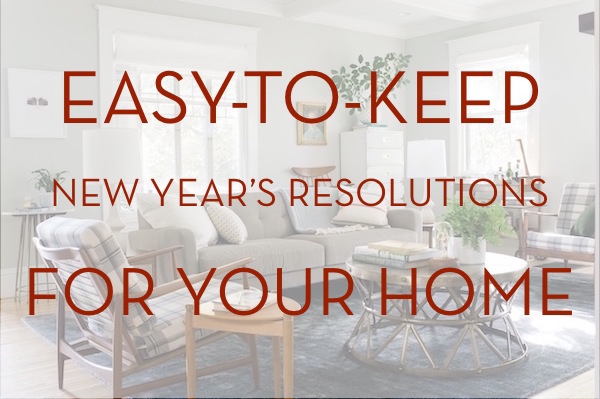 Out with the old: With all the excess of gifts over the holidays, you may have found that more things came into your home than out. But in the spirit of cutting clutter, set up an “out with the old, in with the new” system. Every time something new comes in, something old goes out. That counts for everything, from books to clothes to gadgets. The more stuff that comes in, the more stuff that accumulates and needs to be organized. Go room-by-room eliminating anything old that you don’t use or absolutely love and donate it to a worthy charity. Less mess means less stress!

Store more: We’ve all heard the term “a place for everything and everything in its place.” The same simple principle we tell our children in regards to putting their toys away should apply to us adults as well! Creating designated storage space for messy mayhem makers like mail, cords, and shoes can help keep the “unsightlies” out of sight and give you a place to stash stuff easily. There are literally hundreds of creative storage options from behind the door hangers to under the bed storage bins to vertical shelving corner niches. Thinking outside the box and repurposing one storage item to serve the needs of another is a life saver.

Get safe: What’s more pleasing than a clean, organized home? How about one that doesn’t threaten your life? The New Year is the perfect time to do a safety check around your house to make sure there aren’t any hazards that could harm you or your guests. That includes making long overdue repairs (pipes leaking water on the floor mean slipping hazards so don’t delay!), checking your house for radon, carbon monoxide, and replacing the batteries in your smoke detectors.

Regardless of what your resolutions are for the New Year, don’t forget to include your home in your planning process. The Voss Team wishes you and yours a wonderful and Happy New Year! 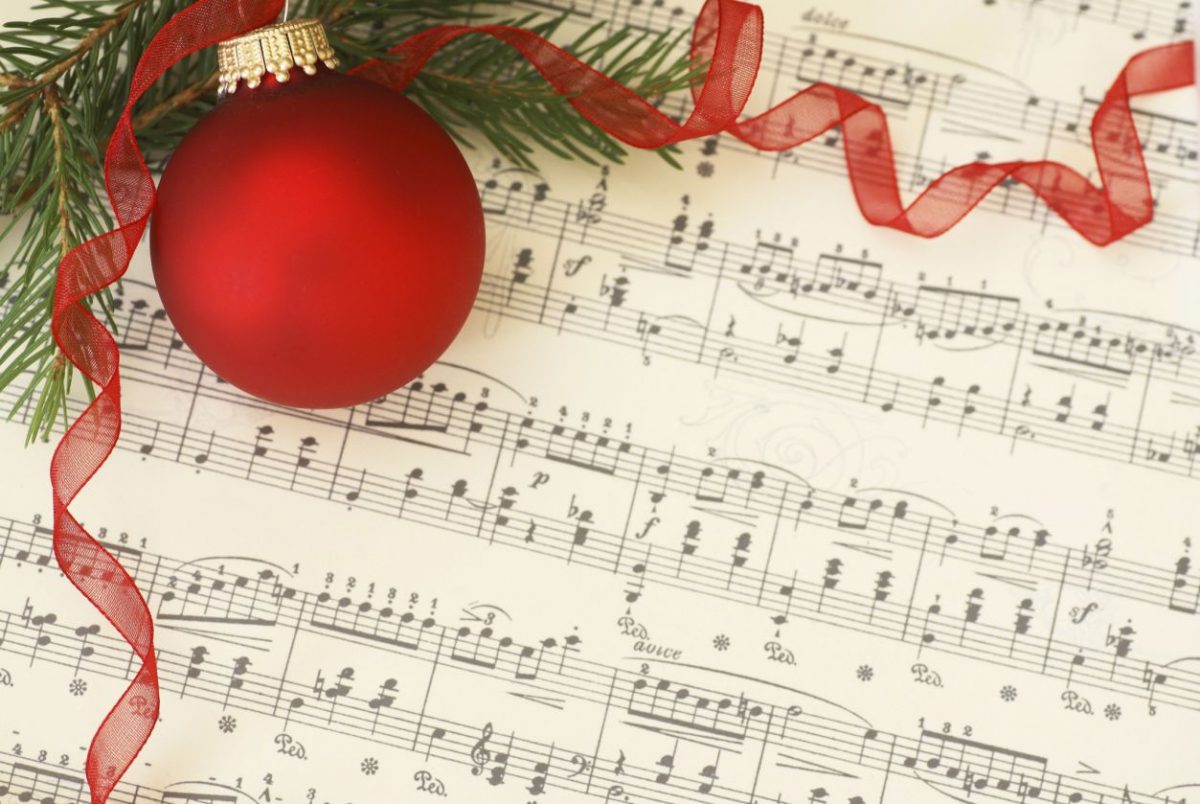 What is it about the holidays that makes us want to gather ‘round and cheer with our favorite carols for all to hear? There’s something about the whimsy of the season that makes even the iciest humbug heart warm with song. So for your enjoyment, here are the top 10 classic holiday songs of all time according to the Huffington Post.

Whatever song is in your heart this holiday season, don’t hold back. Joyously sing with your loved ones as we celebrate the spirit of togetherness and welcome an exciting new year. Happy Holidays, Merry Christmas, and Happy New Year from the Voss Team family to yours. 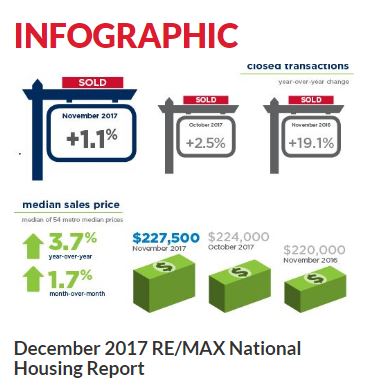 Sales Up Despite Years of Rising Prices, Falling Inventory

November became the sixth month of 2017 to post an increase in year-over-year home sales, bucking prolonged trends of home price increases and inventory declines, according to the December RE/MAX National Housing Report.

The sales increase of 1.1 percent came on the strength of increased transaction closings in thirty-six of the report’s fifty-four markets. At the same time, buyers felt increasing headwinds as the Median Sales Price rose to $227,500 and marked the 20th consecutive month of year-over-year home price increases. In fact, the Median Sales Price has increased year-over-year in sixty-nine of the last seventy months dating back to February 2012.

“The end of the year is typically a slower selling season with low inventory, but our numbers are telling a different story,” said Adam Contos, RE/MAX Co-CEO. “We don’t see any sign of home buyers slowing down their house hunting. In fact, many are taking advantage of lower competition for available homes in the ‘slow season.’”

November’s inventory decline of 14.5 percent extended the streak of consecutive months of fewer homes on the market to 108. The current streak started nine years ago, in November 2008, shortly after the RE/MAX National Housing Report was introduced. Setting new report lows for November were Days on Market at 54 and Months Supply of Inventory at 3.6

Looking to sell your Phoenix home or buy a home in Phoenix? Contact The Voss Team today and receive a complimentary analysis of your home’s approximate present value on the market today. Your complete satisfaction with our service and representation is always our number one priority! 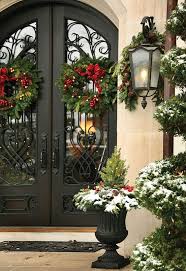 Selling your home this holiday season? Liven up the front door and share your holiday spirit with the whole neighborhood this year with these tips to boost your home’s holiday curb appeal.

Holiday Welcome Mats: Celebrate the holiday season in every way possible by adding a cute themed outdoor welcome mat to your landing. There are tons of designs to choose from and it’s guaranteed to bring a smile filled with holiday cheer to any guest that arrives to your door.

Light Lanterns: Lanterns and luminaries are both functional and beautiful either along walkways or on the porch, regardless of the season. Best of all, what you buy now can be used year-round! Choose one of the new non-flame varieties to be safe and go with the glow!

Go With Garland: Garland is an easy way to add some holiday pizazz to your front entry. Use it to wrap around columns, drape over railings, and frame in doorways. You’ll find fresh varieties at your local nursery and garden center. You can also make one yourself if you’re feeling crafty.

Display Gifts: Looking for ways to re-use cardboard boxes that your online purchases have arrived in before tossing them in the recycling bin? Why not wrap them in festive papers or fabrics, decorate with ribbon and bows, and put them on display on your front porch. They’ll add a pop of color to your front entry way and get passerbys in the holiday spirit of giving!

Which of these holiday curb appeal tips will you try? Deck your halls and share a picture of your best curb appeal addition on The Voss Team Facebook Page here. And as always, if you’re looking to buy a Phoenix home this holiday season or sell your Phoenix home, please contact The Voss Team today for a complimentary analysis of your home’s present value. Season’s Greetings! 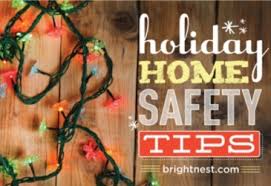 The season of giving is here and even at a time filled with good cheer and holiday gift giving accidents still manage to be on the rise. In fact, every year U.S. fire departments respond to about 230 home fires started from Christmas trees, according to a National Fire Protection Association study. If you don’t want to stuff your stockings with Band-Aids or find yourself spending the holidays in the hospital be sure to remember these 5 helpful home safety tips for the holidays.

1.) Unattended cooking is the leading cause of home fires in the U.S.  When cooking for holiday visitors, remember to keep an eye on the stove.

2.) Use caution with holiday decorations and, whenever possible, choose those made with flame-resistant, flame-retardant and non-combustible materials.

3.) If you plan to travel for the holidays, don’t discuss your plans with strangers. That means keep your business off social media networks at least until you get home. Why risk tainting sweet holiday memories by inviting in the possibility of a break-in.

4.) Don’t want your guests in a cast this holiday? Keep trees, gifts, and decorations out of major traffic areas and away from entryways to prevent slips, trips and falls.

5.) Hosting a party or holiday dinner at your house? Find alternative transportation for intoxicated guests or arrange for them to drive home with a designated driver. And never drink or drive, even if you just live a block away. No amount of eggnog is worth putting yourself or others in harm’s way.

Please remember and share these 5 helpful home safety tips for the holidays with friends, family, and loved ones and enjoy a safe and healthy holiday season out of the hospital! If you’re seeking to buy a Phoenix home for the holidays or if you want to sell your Phoenix home before the New Year, please contact The Voss Team today!