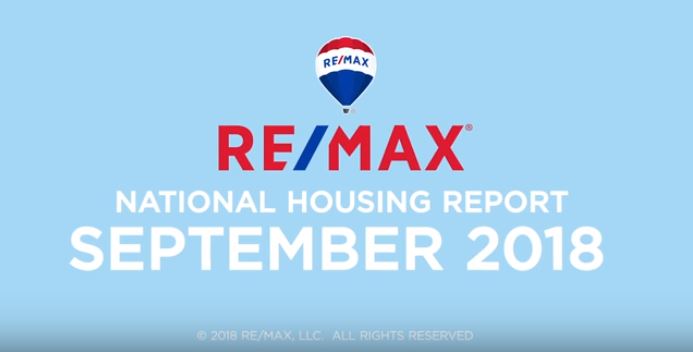 The RE/MAX National Housing Report for September 2018 showed the trends of fewer closings and stabilizing inventory continued through September, punctuated by a surprisingly big 11.6 percent year-over-year drop in home sales. At the same time, the RE/MAX National Housing Report for September 2018 posted a Median Sales Price of $241,000 that marked the 30th consecutive month of year-over-year price increases. It is the highest September price in the 10-year history of the report. To access the housing report infographic, visit: https://rem.ax/2phKHWT.

“The big drop in September closings catches your attention. The market is clearly rebalancing as buyers and sellers continue to process the increasing interest rate environment and what that means to them,” said RE/MAX CEO Adam Contos. “The slower drop in inventory – a visible trend for nearly half a year – further illustrates the ongoing shift toward market equilibrium, and that’s healthy in the long-term.”

Active inventory dropped for the 119th consecutive month, the decline of 4.7 percent from September 2017 was the smallest year-over-year decrease since August 2014. In addition, the September year-over-year inventory drop was the fifth consecutive month in 2018 to post single-digit percent declines rather than the double-digit monthly drops consistently seen over the previous three years.

“It’s a little surprising to see prices staying so strong, but it’s hardly shocking in such a tight market,” said Contos. “The headwinds of rising prices and interest rates amid already tight inventory levels have been crimping affordability and slowing sales for most of the year, but it varies by geography.  In circumstances like these, where the market is tricky to navigate, both buyers and sellers can benefit by aligning themselves with a professional agent – a local expert who can cut through the noise and advocate on their behalf.”

Click here to download your copy of the RE/MAX National Housing Report for September 2018. Looking to sell your Phoenix home or buy a home in Phoenix? Contact the VossTeam today! We offer unparalleled service to all clients in the Phoenix real estate market. Your complete satisfaction with our service and representation is our number one priority!